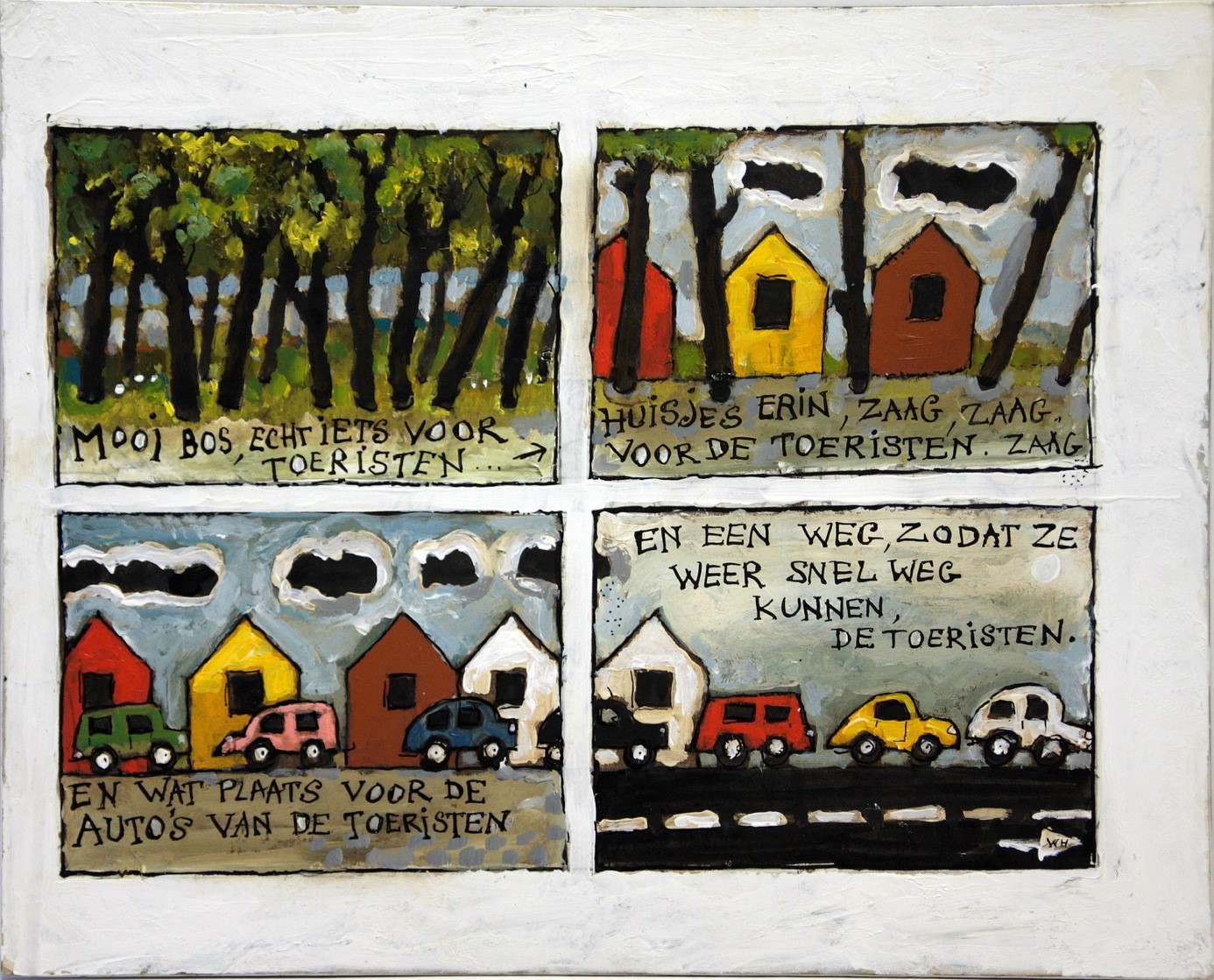 At the very last minute of the centennial year celebrating the beginning of his brilliant career as burgomaster of Vlissingen the VanWoelderenpark committee has acquired the painting Nollebos by the artist Wim Hofman.

It had to be Wim Hofman to act in a ludic way to the proposed construction by the real estate developers in 2015. This happened simultaneously with the commotion amongst the population of Vlissingen. A climax was reached through a flash mob on location by 800 determined nature lovers. When hearing about dumping the staggering amount of 240 bungalows and a large wellness hotel the artist creates this rather unique work for his weekly column in the PZC (Provincial Zeeland Chronicle).

Why unique? With this painting the artist leaves his repertoire as a well-known children storyteller. Here he enters the world of political comic strip with appropriate satire and valid argumentation. He exchanges the warm and safe world of children fantasy for the chilling reality of a society run by apathetic adults. A society too often based on money and power and in which many individuals could not care a damn about nature.

Unique because it depicts a story in which many inhabitants of Zeeland, especially from the older generation, will recognize its symbolism: that of ever-increasing languishing of unspoiled nature. At first slowly in dribs and drabs in the sixties and seventies followed by a rapid acceleration and since the turn of the century as a sort of festering cancer. In Nollebos four images are linked together in a recognizable pattern. Each of them is a snapshot taken from a slow-motion picture. Furthermore, it is unique because Hofman combines in a simple but smart way poetry with cynicism in his use of staccato words. The short but powerful word ‘zaag’ (to saw) repeated consecutively three times bears a tone of aggressiveness. The word ‘weg’ appears twice, first in the meaning of a roadway and secondly as a word which implies literally chasing away the tourists. Last but not least the word ‘toerist’ (tourist) repeated condescendingly four times is meant to be a sarcastic reference to an indispensable source of income in Zeeland. For many inhabitants, particularly for those living along the popular coast, this massive invasion is accompanied with unpleasant nuisance.

The committee has spoken with the artist. He has given his permission to use his painting on our website for educational purpose only. The committee sees this luminist and divisionism work of art as some sort of figurehead in the fight against large-scale commercial exploitation of our fragile nature and against the construction of massive private structures which will kill the soul and the experience of this social park for good.