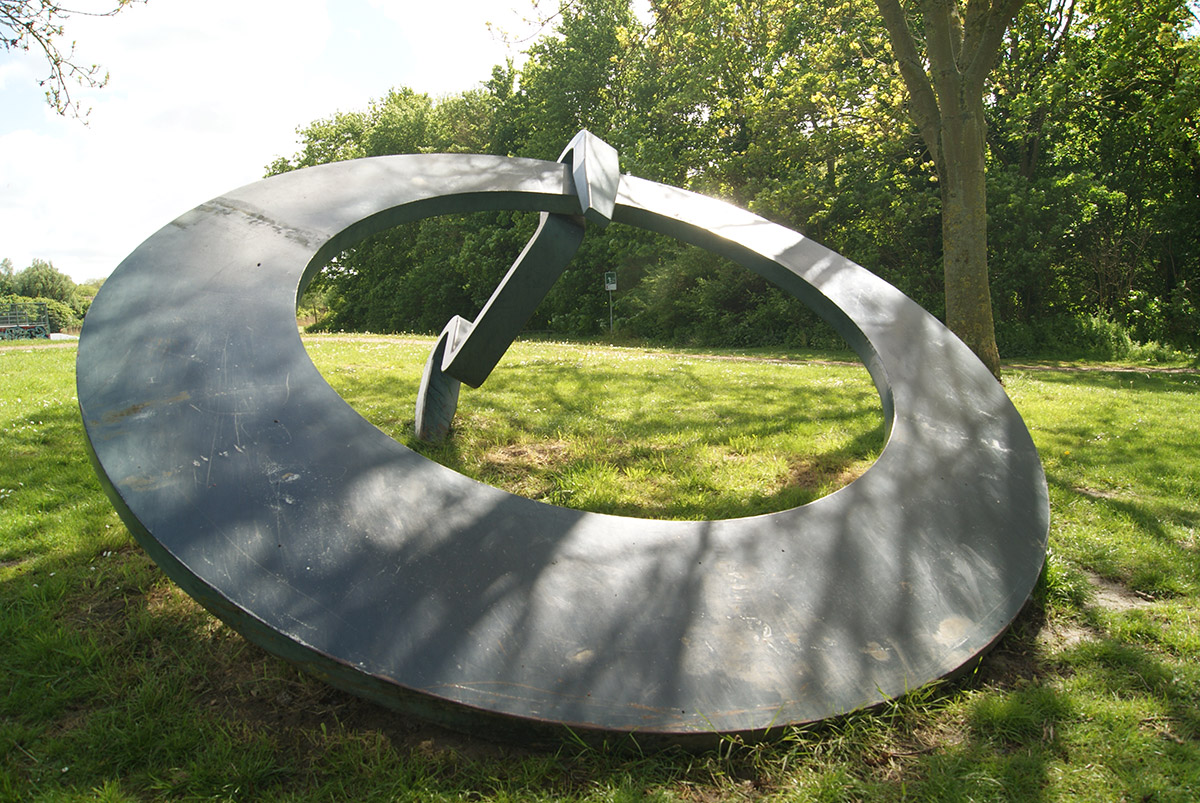 This work made from welded steel plate with a dark-green bronze patina is a reflection of our relationship with nature, light and shadow and is a gift from the artist (1986). The original location for this sculpture was supposed to be the Rondeel near the16th century fortifications at the harbour entrance. In the end the city council chose for a location in the park which is arguably more appropriate. For the artist the other location was not desirable: ‘My work is about time and light and not about war’ was his comment. ‘Sun Writes Shadow’ is establishing a relationship with the natural environment. Here it’s thematic makes a better statement. The circle stands for the endless movement simultaneously with the sun, supporting the circle, as a sort of writing leaving temporary shadows on the earth. Space and movement are joined together, while the oblique side of the circle is showing gravity. 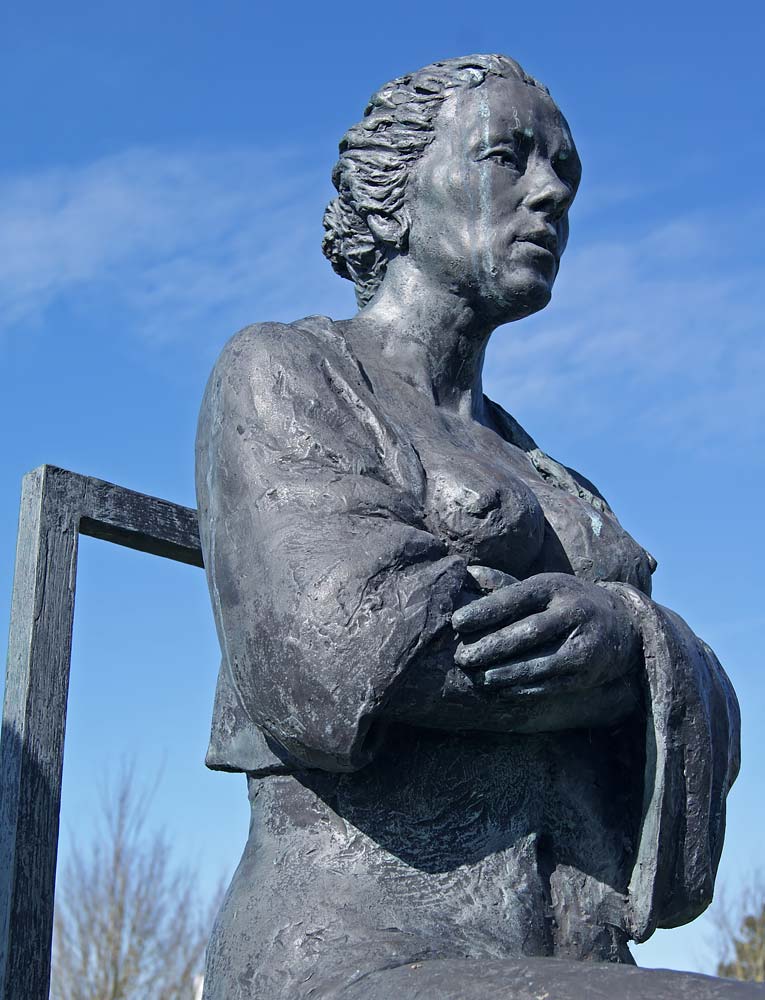 Two meters above the ground a man and a woman tower above everyone else. The wobbly equilibrium symbolises the risky side of our technological society. The man wears a shirt, the woman bears only a cloth around her shoulders. Both are looking aimlessly at the horizon, as if hypnotized. They look very fragile on the bizarre high chairs far disconnected from nature. They also have something unapproachable, withdrawn high above earth in their own world. Haas made this sculpture ‘The Couple’ in 1982 as a symbol of the contemporary human being who in ignorance disconnects itself from nature while trusting the technology which is manifesting itself more and more in our everyday lives. But this balance has ultimately become dubious. Jan Haas was self-taught. Drawing was the foundation for his work, but he manifested also as a painter, engraver and sculptor. Reoccurring basic themes in his work are human relationships and nature. 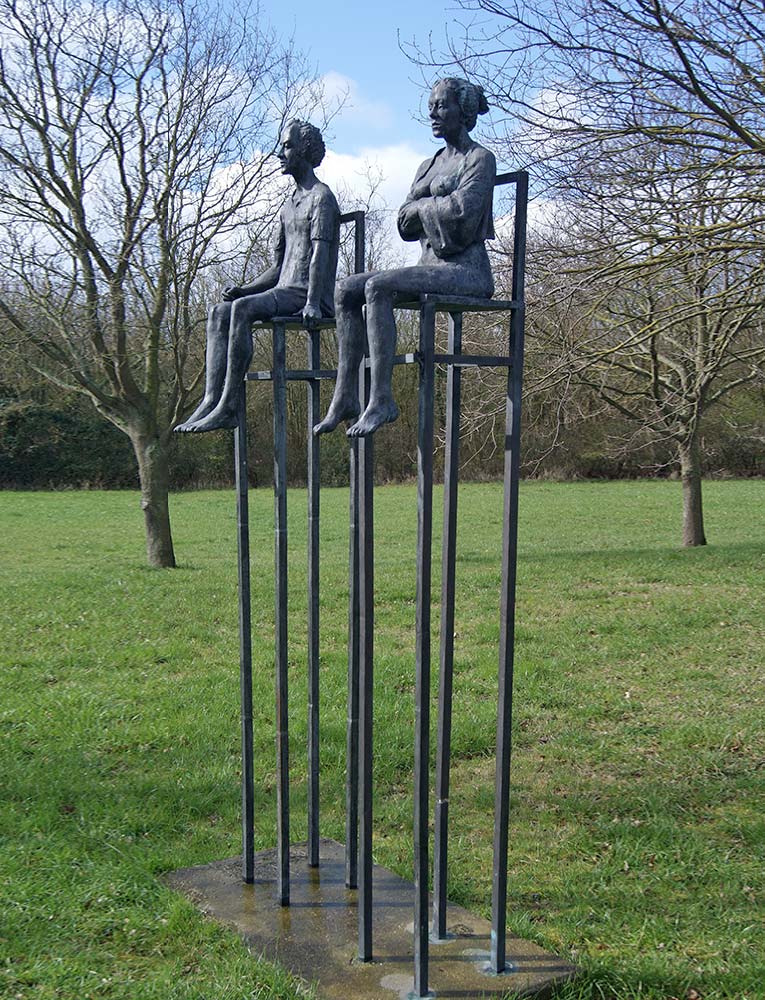 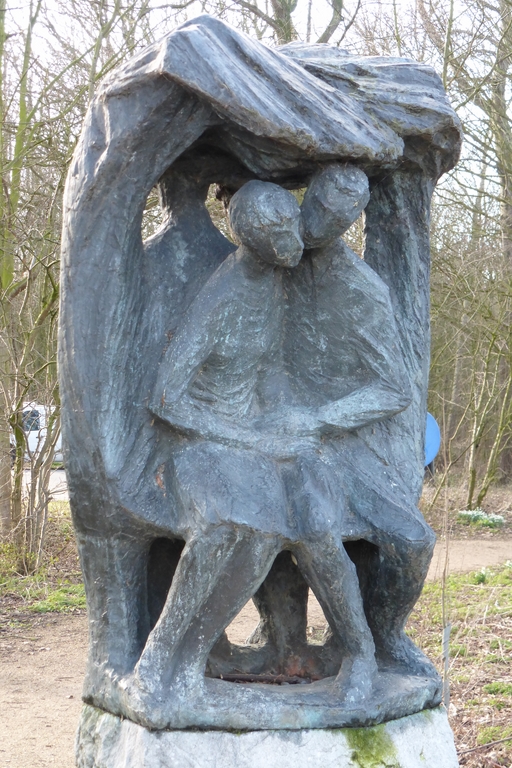 On the Burgomaster van Woelderenlane at the crossing of the President Rooseveltlane stands this bronze sculpture by L. Messer. It was placed on location in 1964 and was a gift from the former burgomaster of Flushing C.A. van Woelderen to the city inhabitants. It depicts the transience of life.

A young couple and an old couple are sitting back to back. It’s about love, but the attitude which they may have adopted towards each other is susceptible to different interpretations. You could also see it as a generation conflict turning its back, but also as the continuity of experiencing life through which they support each other. 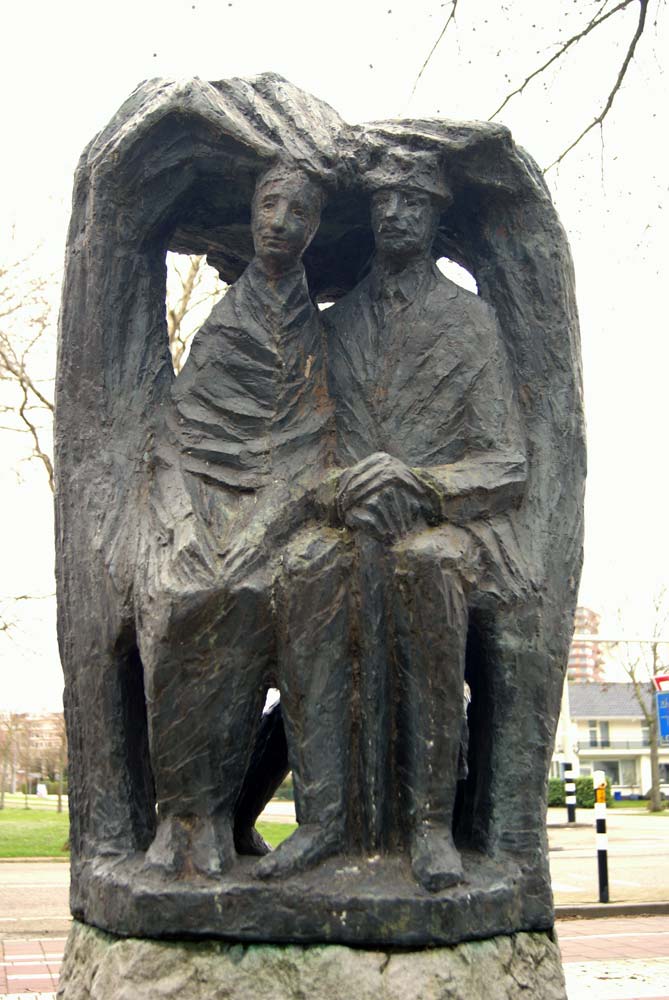 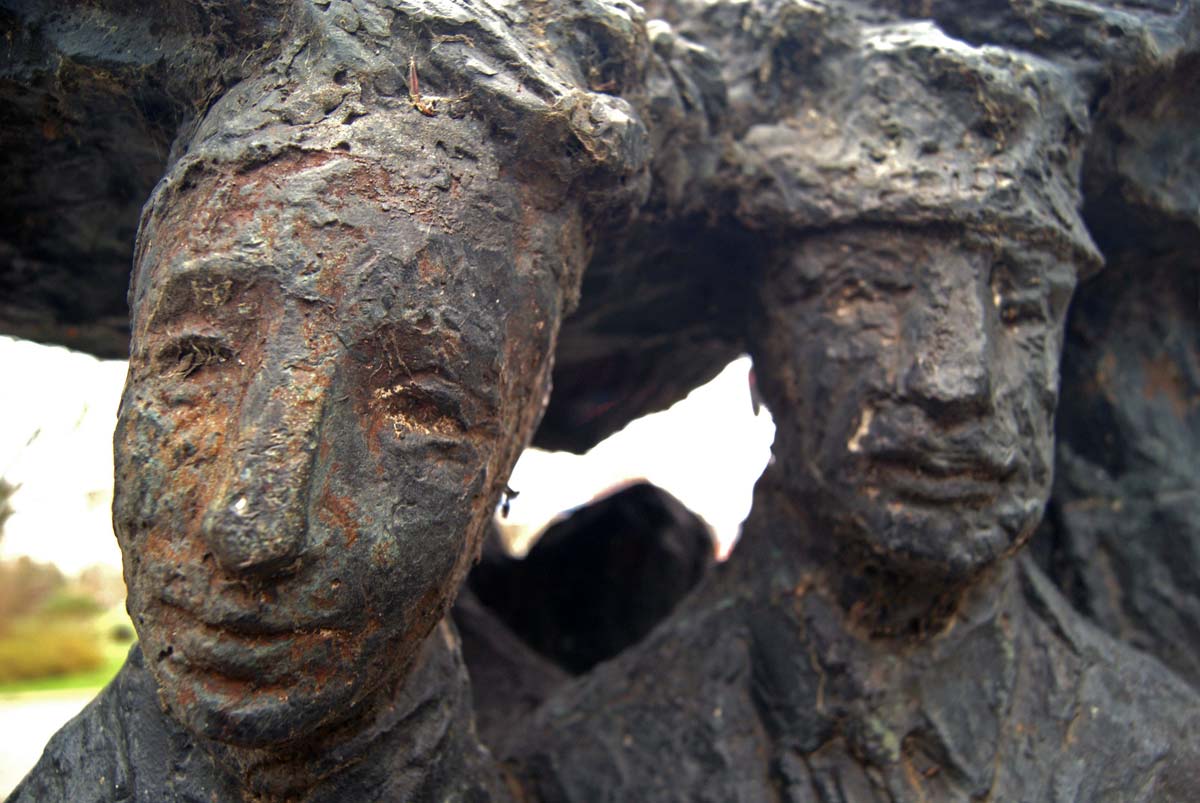 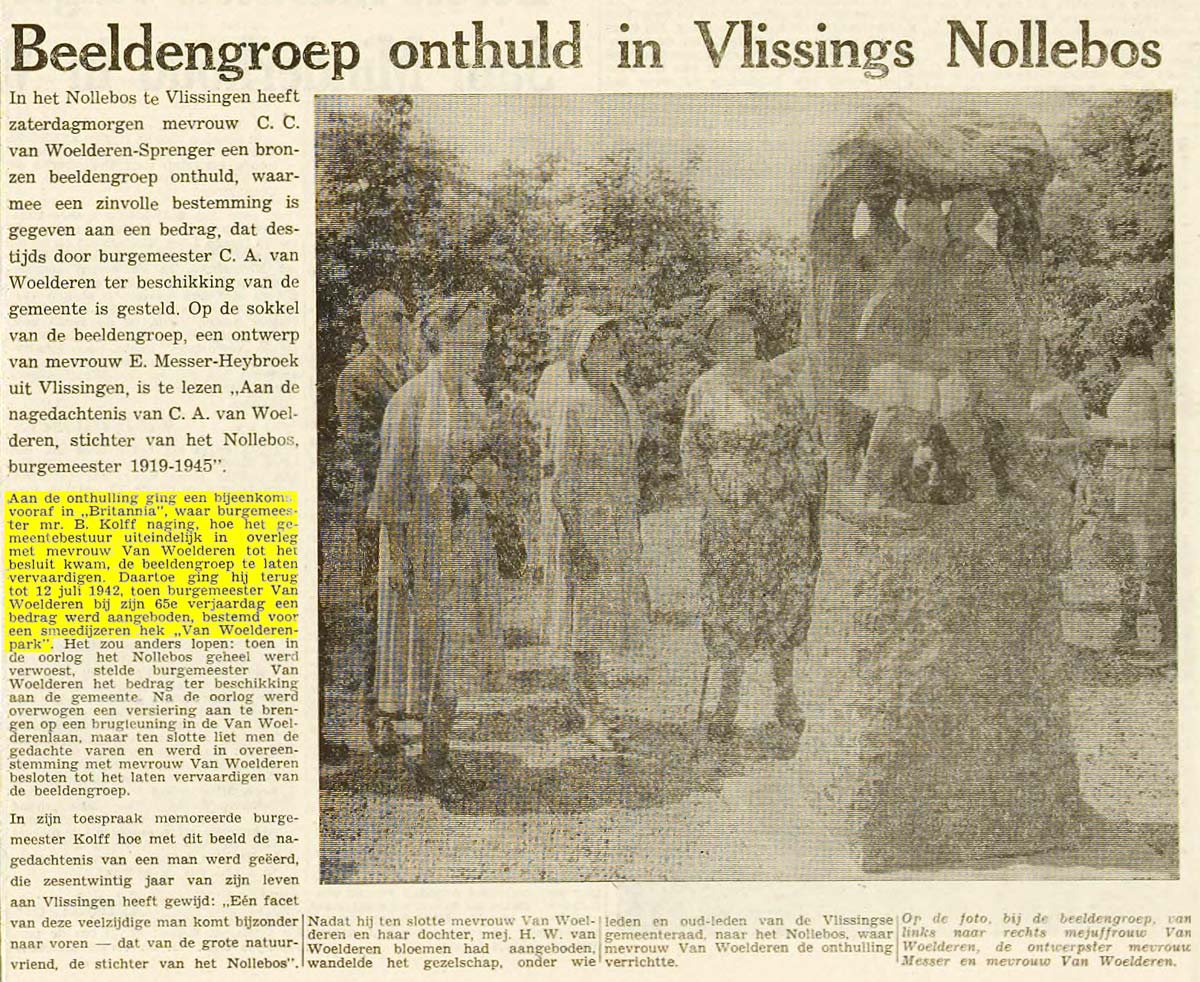 Foundation: sculpture from Kees Keijzer is better located in the Nollebos 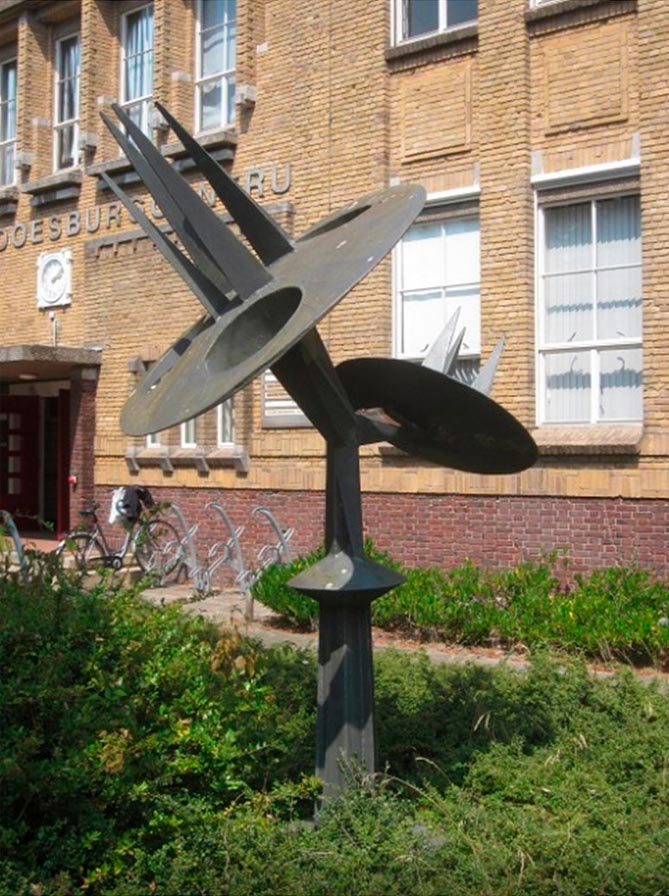 Flushing-One of the three recently restored ‘growth’ sculptures by Kees Keijzer deserves a place in the park. The ‘beautiful sculpture’ is better located there than in a small field next to the Sloeweg. This idee is being propagated by the VanWoelderenpark foundation.

‘The Nollebos and the Westduinpark already have several pieces of sculpture. A sculpture by Keijzer can contribute considerably to a permanent art exhibition in the Flushing city park.’ assures Jean-Marie van Isacker. Since he moved to the Burgomaster van Woelderenlane the former art and antiques appraiser has been touched by the park’s beauty and it’s founder.

Last year van Isacker hatched out as a forester, a gardener, a protector of the park and a local historian advocate of the burgomaster who birthed the Nollebos. As such he decluttered toppled trees, removed hundreds of giant hogweeds that were threatening walking people and discarded fish that were killed by the heat. He also brought to the attention the damage which he discovered on the sculpture ‘The Couple’ by Jan Haas and the fact that man and woman had exchanged places on their return from the restauration.

‘One of the ‘growth’ sculptures has something of a telescope, especially in the vicinity of a transmission tower. In the park It gives the spectator the chance to view it in all tranquillity rather than alongside the (Sloeweg) road with constant heavy traffic’ argues van Isacker. ‘Not all three of the ‘growth’ sculptures have to be placed in the ‘VanWoelderenpark’’, the name which his foundation prefers. ‘On the previous location in the garden of the Bethesda hospital they looked fine together, but right now they can stand on their own. The other two sculpture can as far as I am concerned be located on the Sloeweg’.

On Tuesday the city council had not yet received the suggestion from the foundation yet but they will discuss it later upon arrival.